Debugging SSJS - What the heck am I looking at?

If you have an error in a WCTL script file, the error and its location will be written into the webx.log file, a warning message will appear on the cache reset screen, and as Sue has pointed out the existence of the error - if not its provenance - is often made obvious when your site appearance goes pear-shaped. Errors in SSJS syntax can be a little more difficult to track down, if for no other reason than JS is more frequently used for backend-type functions where nothing gets written to the screen directly. If you have an error in a filter, for example, the only sign of it may be that the filter doesn't give the expected results.

One way to deal with this is to put all the significant pieces of your code inside a try/catch structure and write an exception handler. That's certainly best-practice for production code, but during development the Webcrossing server will provide you with a wealth of information, really an embarrassment of riches, for any uncaught exception in your JS code.

All you have to do is look in your /system folder for files named in the format of logJsErrorN.html (where N is an integer). One gets written whenever an exception is thrown. It's an HTML file, it can run to be upwards of 3000 lines, and there will rarely be a time when anything past the first couple of dozen lines will be of use to you. Here's an example: 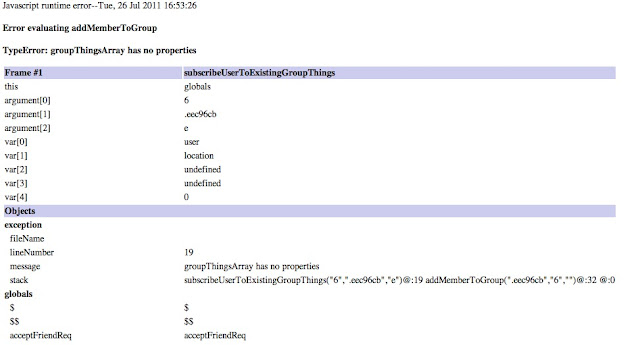 Now, the next 2000-odd lines are an enumeration of every single object in the execution context at the moment of the exception: every global, every function, every built-in method and property. I'm sure there are circumstances where this information can be useful, but I've never run into one!
Posted by Michael at 9:00 AM